In this tutorial, you will:

Each of these business processes will be executed step-by-step using the demonstration APIs and some scripts.

In this section, we are going to see how to deploy the KContainer Shipping Container Reference Implementation on the OpenShift Playgrounds hosted environment.

In this section, we are going to guide you through different scenarios to not only demonstrate the end goal of the KContainer application of creating an order to ship goods from a source port to a destination port but some of the EDA patterns that it implements as well.

First thing we want to do is to be able to inspect the state of each of the components involved in the creation of an oder. These are:

In order to check the state of each of these components and see how these evolve and react to the events happening within our application, we need to expose them individually through OpenShift routes. Of course, this is not a best practice for production-ready applications but a tool for us to be able to understand what is going on behind the scenes in our Event Driven Architecure KContainer reference implementation.

We have created the following get_state.sh script that will grab the route for each of the KContainer components involved in the creation of an order listed above, set these up with the appropriate context path and poke them to retrieve their state so that you don’t have to do so manually in the terminal and web browser (which you may want for a client demo so that it may be a bit more visual…).

To grab the script and make it executable, run the following in your terminal:

These script runs and infinite while loop to get the state of each of the KContainer components involved in the creation of an order every time to press any key. Execute the script by running ./get_state.sh:

We can see that the initial state of our KContainer application does not count with any order already in the system which is what we should expect after a new clean deployment of the solution. However, it does have 4 voyages already in the system (disregard the plannedDeparture and plannedArrival attributes. We are only interested in the srcPort, dstPort and freeCapacity attributes). Also, there is no container at all in the system which we need if we want to carry goods from a source port to a destination port.

As a result, the first thing we need to do before creating an order is to add a new container at the source port into our system. For that, the Container Management component exposes and API which the following create_container.sh script will make use of. On a new terminal tab, download the script and make it executable:

As you can see, we have created an Empty container whose currentCity is Shanghai, where there is also a voyage to carry goods from to Oakland, and capacity of 10.

You can go back to the terminal tab where you executed the get_state.sh script and hit any key again to see what the state of the system is now:

that shows, again, the container we have just created is reflected in the system as you would expect.

We are now ready to create a new order in our KContainer application to carry some goods up to 10 from Shanghai, where we created the new container, to Oakland which is one of the existing voayages in the system.

In this section, we are going to create a new order to ship goods of 10 items overseas from Shanghai to Oakland as the GoodManuf manufacturer. By creating this order, we are going to observe how our Event Driven Architecture KContainer reference implementation works both from the outside (the order gets assigned which means it has a container assigned to carry the goods and a voyage allocated to ship the container overseas) and from the inside looking at the CQRS, SAGA, Event Sourcing, etc patterns as well as the different events in Kafka, our event backbone.

Open up the KContainer application user interface on your web browser by pointing it to the route you got presented with at the end of the previous Deploy the reference implementation section. You can also find the route executing: 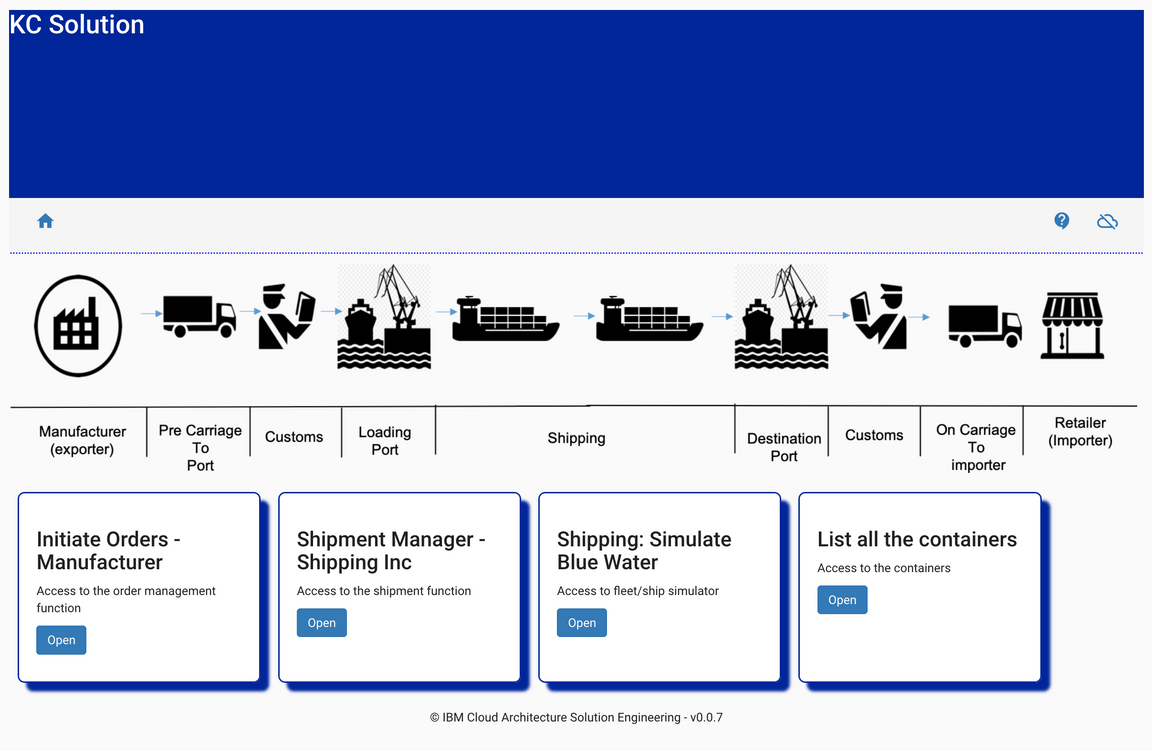 Click on the Initiate Orders - Manufacturer tile to create a new ‘fresh product’ order to ship overseas. This simulates the activity that would usually be carried out by the manufacturer in our scenario.

To represent different manufacturers, the first select box has been designed to support multiple scenarios in the future. For the purposes of this quickstart tutorial, select GoodManuf. 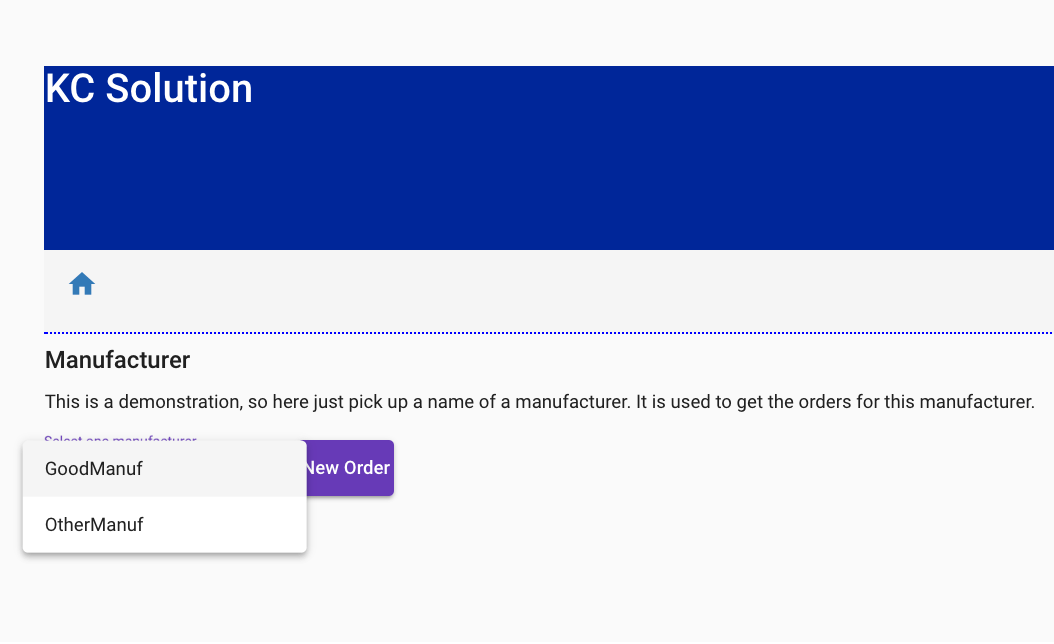 Once the manufacturer is selected, a list of existing orders will be displayed. As expected, there is no orders in the system yet for the GoodManuf manufacturer.

Click on New Order and a form to create a new order will be displayed on the right hand side of your screen: 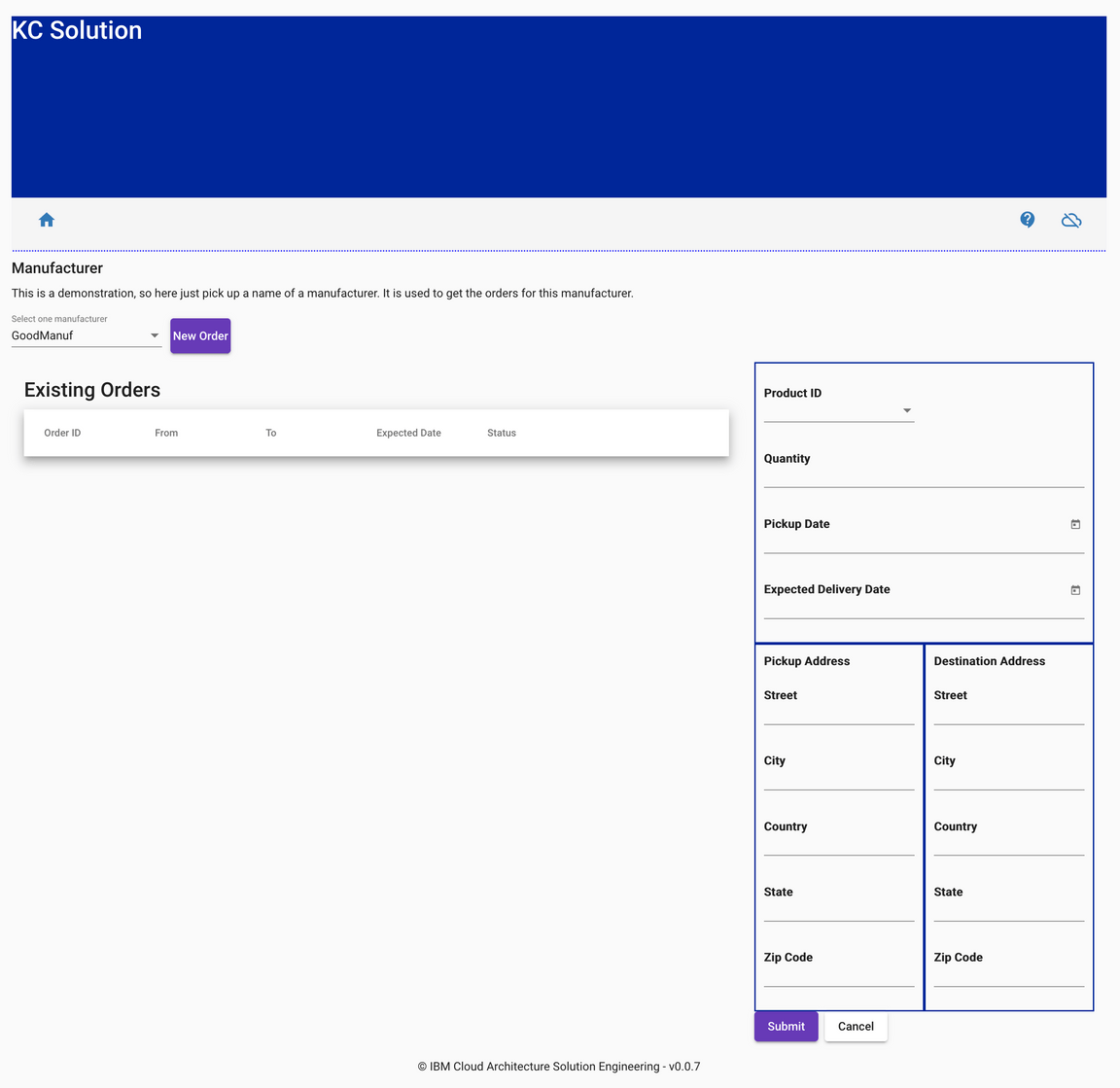 Now, in order for the demo to work, we must make sure that the new order we submit has

the reason for this is that we created in the Setup section a container in Shanghai with a capacity of 10 and we know there is only one voyage whose source port is Shanghai and that voyage ships containers to Oakland. The rest of the attributes, will not have effect on the order management. DO NOT click Submit yet. 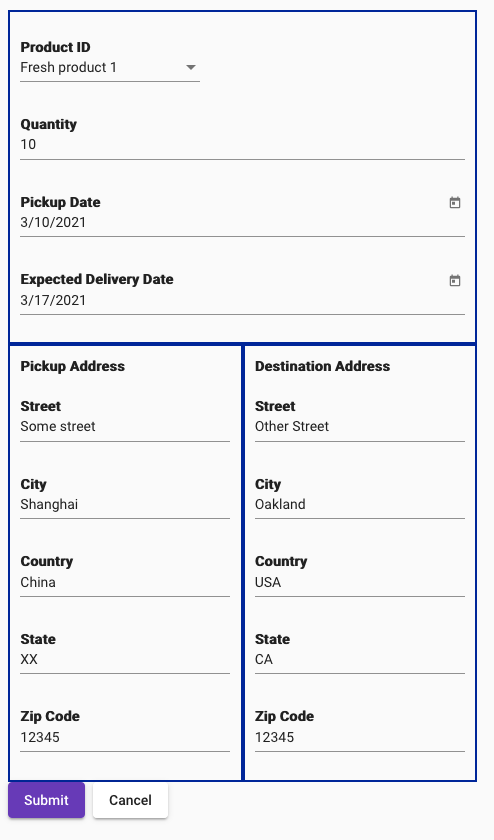 We are ready to submit our new order for the KContainer application to process it. But first, let’s go over what is meant to happen behind the scenes as a result: 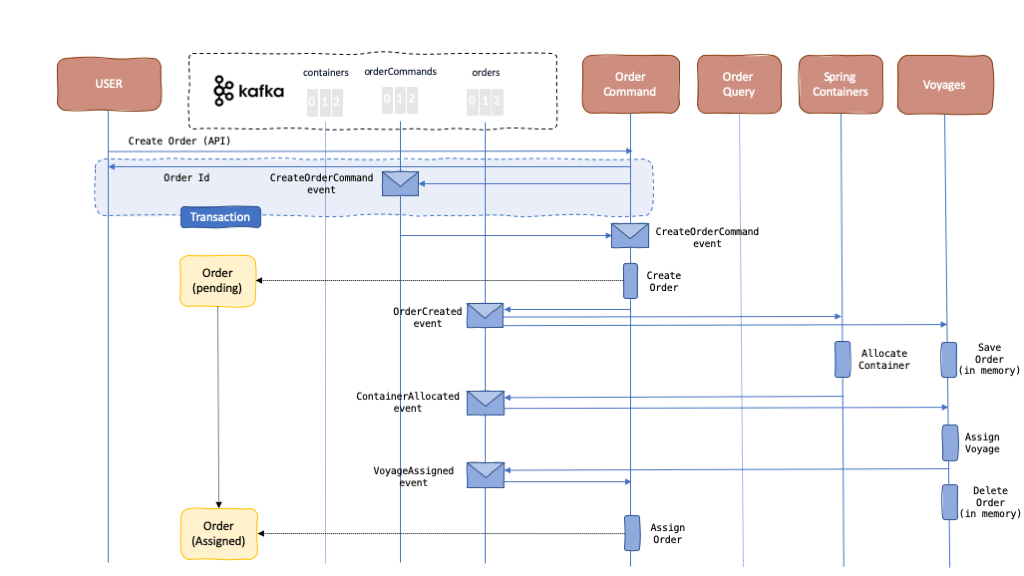 Ok, this time we really are ready for creating a new order. Make sure you have the get_state.sh script running on a terminal so that you execute it right after hitting the submit button for the new order in the user interface. This way, we would see the intermediate Pending state of the order:

where we can already see the following interesting facts:

If we had the ability to refresh the user interface and select the GoodManuf manufacturer once again to get its orders listed, we should see the order is also in pending state.

If we now, after 10 secs aprox, hit again any key in the terminal where we have running the get_state.sh script:

we should see that:

Again, if we refresh the user interface and select the GoodManuf manufacturer, we should now see the order in assigned state.

Finally, we want to inspect the events in both the orderCommands and orders topics of our event backbone.

If you wish to cleanup your environment to the initial state where no order or container was created and your kafka topics where empty, execute the following steps from the terminal: